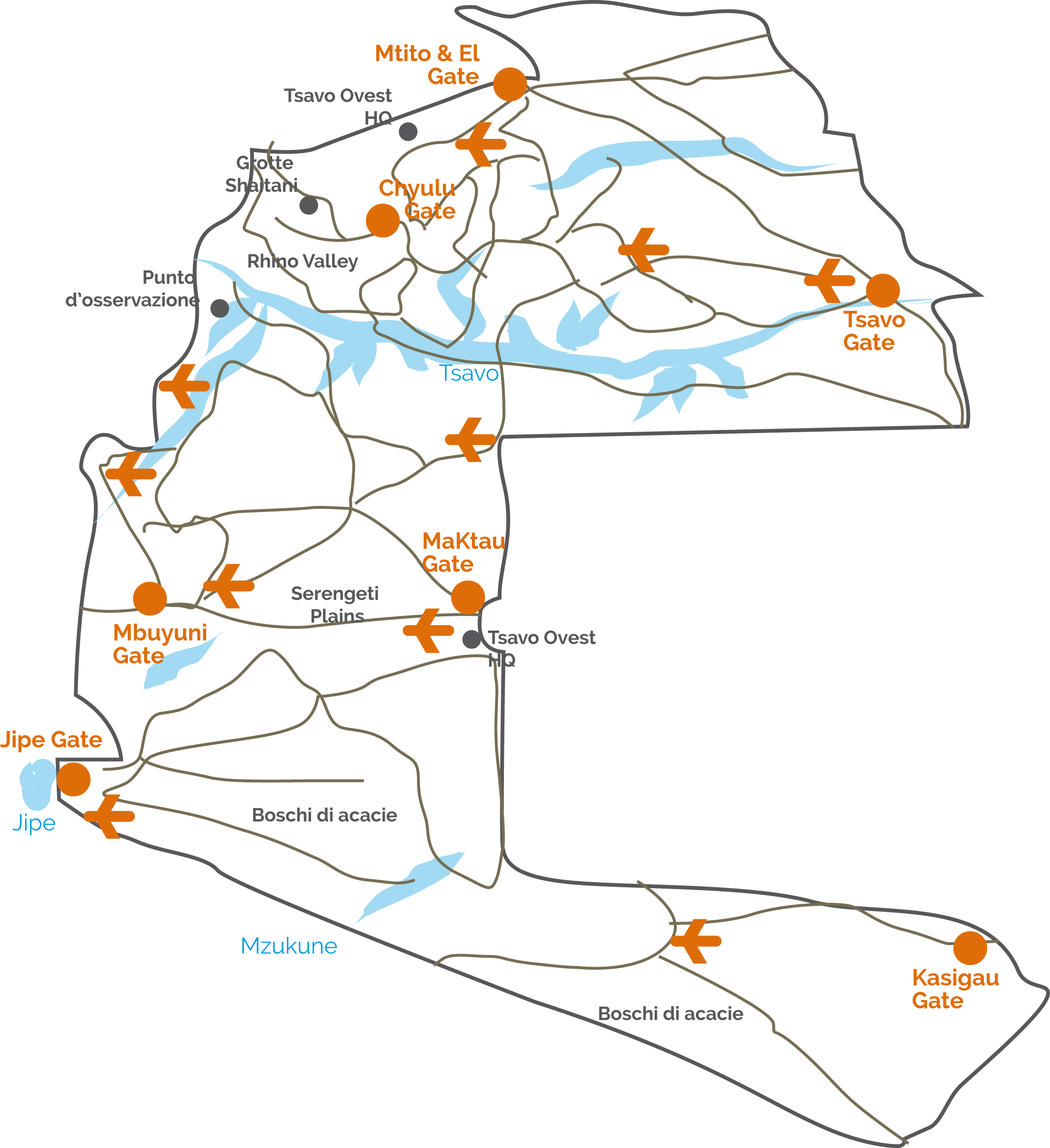 Tsavo West and East National Parks were established in 1948 as a single park, but in the course of the years it was divided into two due to the presence of the Mombasa-Nairobi highway and the railway line which passes through the park. Tsavo west is about 188 kms from Mombasa, 333 kms from Nairobi and covers an area of around 7065 kmq. Its relative closeness to the coastal beaches makes it accessible even for one day safari even though a night in savanna remains unforgettable experience. The topography of the park varies a lot more than that of Tsavo east, infact it passes from 200 m above sea level to about 1000 m above sea level and it encompasses mountains and hills, bushes, semi-arid desert scrub, acacia woodland palm, thickets, baobab tree, rivers and the tranquil Lake Jipe from the Tanzanian border to the mountain forests of Chyulu hills, wide range of landscape which offers protection to many endangered african animals. For example, the Ngulia Rhino Sanctuary has a Black Rhino project, saving “threatened species”.

The park is home to many native animals of Kenya, the Big Five (lion, elephant, buffalo, rhino, leopard) hippos, wild dogs, cosen’s gerbil, rats, hartebeest, black faced velvet monkey, hares, mongoose, crested porcupines, waterbucks, antelope, cheetah, giraffe, grevy’s zebra, among others. It is also a good place for bird watching with over 500 specie including the migratory birds; african skimmers, red and yellow bishops, goshawks, buffalo weaver, palm nut vultures kestrels, buzzards, starlings, kingfisher, hornbills, ostriches among others. The Mzima springs is at the north end of the Tsavo west, fed by the water from the Chyulu hills that run beneath the lava, forming several natural pools. Fringed with palm trees, these pools are mostly populated by animals; the giant crocodile, hippos and several birds. Don’t miss the famous lava flow of Shetani (shetani in kiswahili means devil) a geological lava bed about 8 km long and about 1.5 km wide with a cave on the middle. The cliffs offers some of the best rock for climbing, to view over the spectacular savanna plains, and with a little bit of luck, you can see right to Mount Kilimanjaro. Visit the 300 m cliff on the East-side of kichwa tembo, the great Tsavo Chimney or the Ivory tower on the elephant rock. The park was made famous by the pair of maneless male lions who terrorized the area, reputedly killing over 135 workers during the construction of the Kenya-Uganda railway in the 1898. These man-eaters dragged men out of their tents despite the thorn fences (bomas) built to keep them away, till they were shot dead by the Lt. Col. John Henry Patterson. This story inspired the famous film “ The Ghost and the Darkness”. The park is also famous for its red skinned elephant.