This type of safari allows you to discover the authentical wildness of Tanzania. Its rich rivers and lakes, where the water loving animals live, having the opportunity to admire them closely.

Day 1
Dar es Salaam / Selous
After breakfast you leave Dar es Salaam and drive towards Selous Game Reserve with pic-nic lunch. The arrival is estimated in the afternoon, enjoy your game drive while heading to lodge/camp choosen for dinner and overnight.
Day 2
Selous
After breakfast you spend the whole day in game drive in this most pristine wilderness still remaining in Africa, with a wide variety of wildlife habitats, named after Captain Frederick Courtney Selous, a legendary 19th century naturalist, explorer and hunter. Experience a walking safari and boat safari during these 2 days. The Selous Game Reserve is Africa’s largest protected wildlife reserve and covers more than 5% of Tanzania’s total area. It’s rivers, hills, and plains are home to roaming elephant populations, the area’s famous wild dogs, and some of the last black rhino left in the region. The Rufiji River Delta is a striking feature of the game reserve. It connects the Great Ruaha River with the Rufiji River and not far from the park boundaries empties out into the Indian Ocean along the Tanzanian Coast. The Rufiji River is the largest water catchment locations in the region and home to a variety of water bird life. Along its shores, oppulent hippos sleep languidly in the mud and sun themselves, mouths wide open, as the river passes by. Crocodiles are also common along the Rufiji’s riverbanks, their armour plated skins the only rough edges in the rivers incessant flow. Stiggler’s Gorge, where the Great Ruaha River meets the Rufiji River, is a breathtaking example of the diversity and spectacular scenery along the game reserve’s waterways. Dinner and overnight in lodge/camp choosen.
Day 4
Selous / Mikumi
After breakfast transfer to Mikumi National Park. Visit a snake park if there is enough time before proceeding to Mikumi with game drive en-route while heading to your lodge or cottages for dinner and overnight.
Day 5
Mikumi
After breakfast you spend the whole day in Mikumi National Park for game viewing. Mikumi National Park lies on the northern border of Selous Game Reserve. During game drives you will be impressed by the open horizons and abundant wildlife along the Mkata Flood plain, the popular centre piece of Mikumi which draws frequent comparisons to the more famous Serengeti Plains. Dinner and overnight in lodge/camp choosen.
Day 6
Mikumi / Ruaha
After breakfast you drive to Ruaha National Park. Ruaha lies 130 kilometers west of Iringa town. Its name derived from the Great Ruaha River, which flows through the park and create spectacular gorges and scenery. Hippos, crocodiles, turtles and fish inhabit the river. The park is also known for its sable and roan antelopes and rich of bird life. With herds of more than 10.000 elephants, vast concentrations of buffalo, gazelle, and over 400 bird species. Ruaha has a limitless wilderness thats surrounds other game reserves; Rungwa and Kisigo which stretches over 40.000 square kilometres. Elephants are found in some of the highest concentration in the country, travelling in matriarch-lead herds through ancient grazing lands and seasonal supplies of water. The Great Ruaha River is the main feature of the park, and meanders through its borders. On its banks, the game viewing is spectacular, whether done by land or by water. Hippos yawn under the midday sun and crocodiles lie lazily along the banks. Fish eagles dive and swoop along the riverbanks, and at night the sound of frogs croaking happily in the reeds extends across the hills and plains. Dinner and overnight in lodge/camp choosen.
Day 7
Ruaha
After breakfast you spend the day in Ruaha National Park for game drive. Picnic to dedicate more time in game drive. Back for dinner and overnight in lodge/camp choosen.
Day 9
Ruaha / Udzungwa National Park
After breakfast drive to Udzungwa National Park. Udzungwa is the largest and most biodiverse of a chain of a dozen large forest-swathed mountains that rise majestically from the flat coastal scrub of eastern Tanzania. Known collectively as the Eastern Arc Mountains, this archipelago of isolated massifs has also been dubbed the African Galapagos for its treasure-trove of endemic plants and animals, most familiarly the delicate African violet, not only a conventional game viewing destination, Udzungwa is a magnet for hikers. An excellent network of forest trails includes the popular half- day ramble to Sanje Waterfall, which plunges 170 metres (550 feet) through a misty spray into the forested valley below. Back for dinner and overnight.
Day 10
Udzungwa National Park
After breakfast you start your activities in Udzungwa National Park. Dinner and overnight in lodge/camp choosen.
Day 11
Udzungwa National Park / Saadani
After breakfast drive to Saadani National Park. Saadani is where the beach meets the bush. A surprisingly wide range of grazers and primates is seen on game drives and walks, among them giraffe, buffalo, warthog, common waterbuck, reedbuck, hartebeest, wildebeest, red duiker, greater kudu, eland, sable antelope, yellow baboon and vervet monkey. Dinner and overnight in lodge/camp choosen.
Day 12-13
Saadani National Park
These two full days are dedicated to the activities in Saadani National Park: game drives, boat safari on Wami river, walking on the beach, relax on the beach etc. Dinner and overnight in lodge/camp choosen.
Day 14
Saadani National Park / Dar Es Salaam
Leave Saadani National Park and transfer to Dar Es Salaam Airport to proceed with your holiday extension (in Zanzibar, Pemba, Mafia or Pangani) or fly back home.

If you wish to continue with beach holiday after your safari, we advice you to have 2 luggages: a soft bag for safari (max 15 kg) and the beach suitecase that you will leave it to our staff on arrival at the airport. Our staff will help you find it in hotel/resort on arrival from safari. 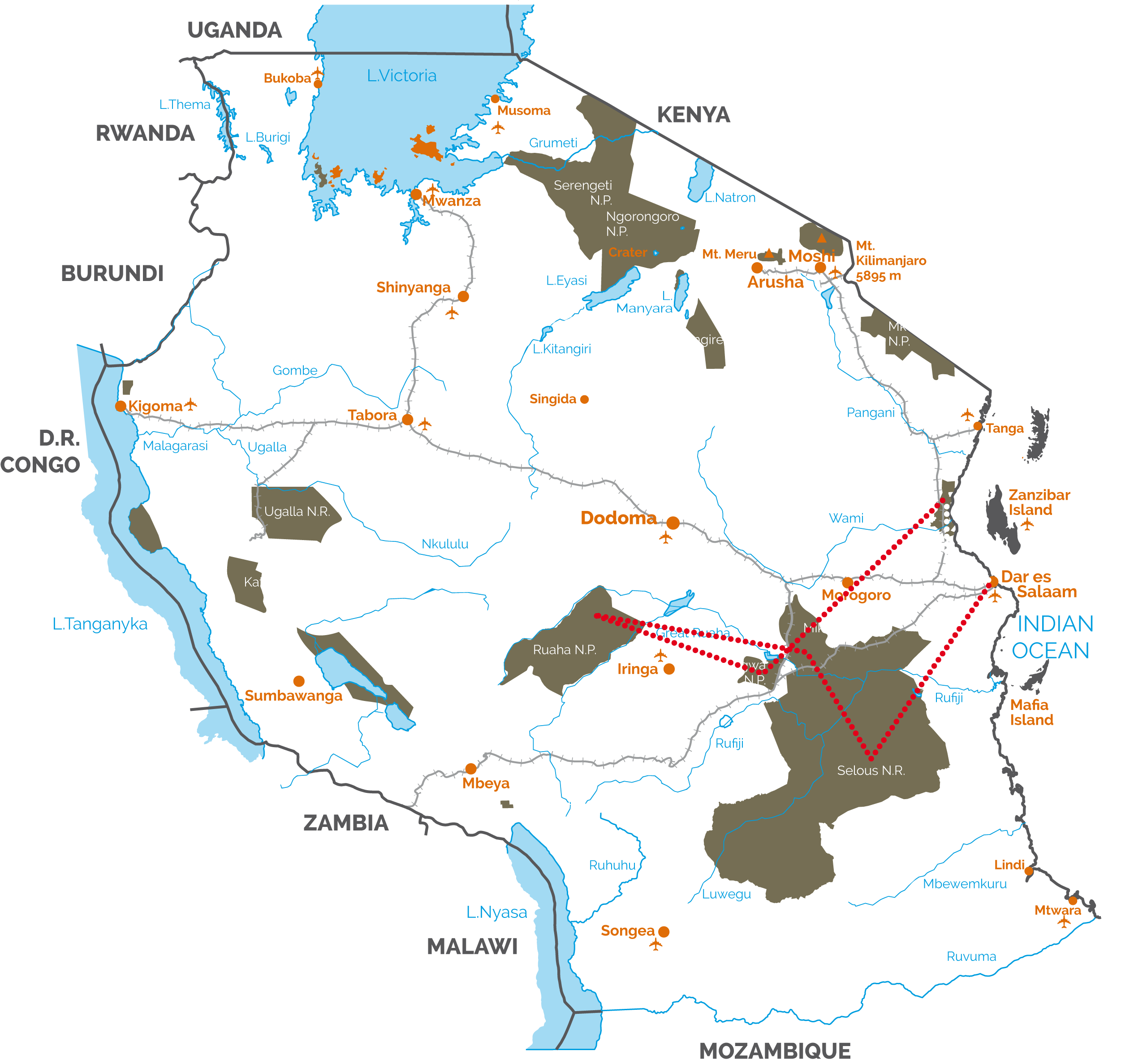 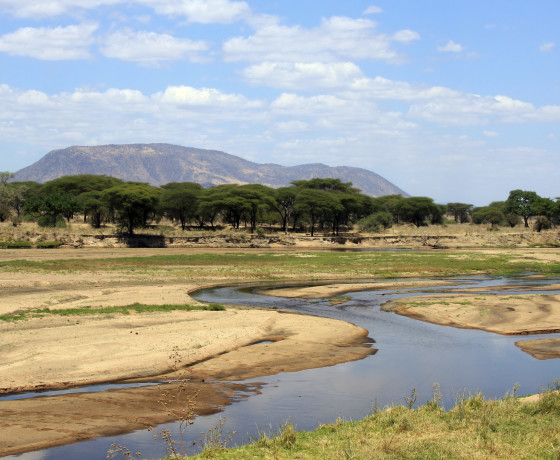 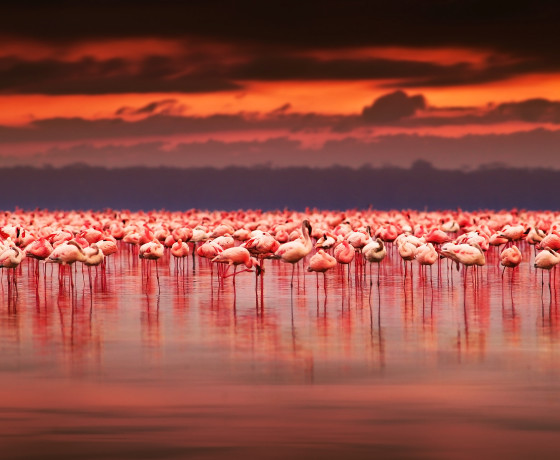 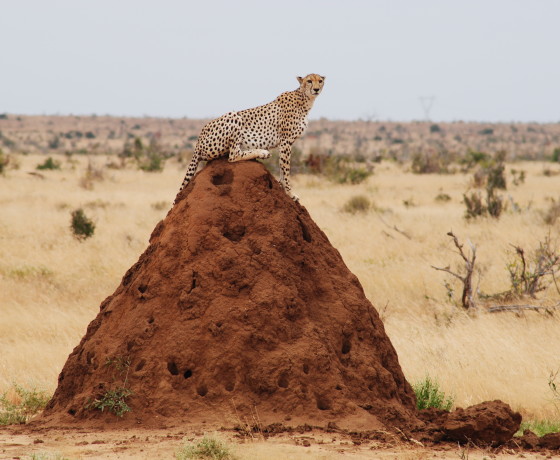 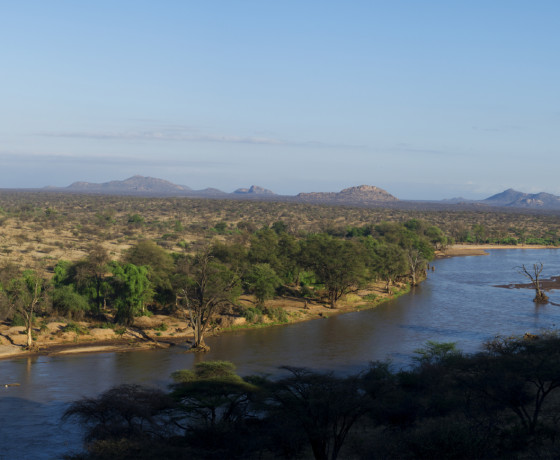 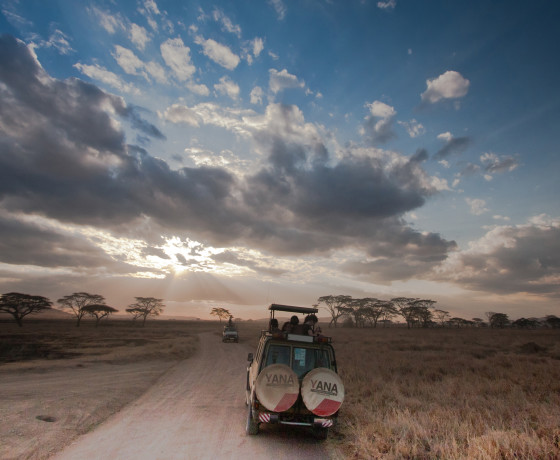 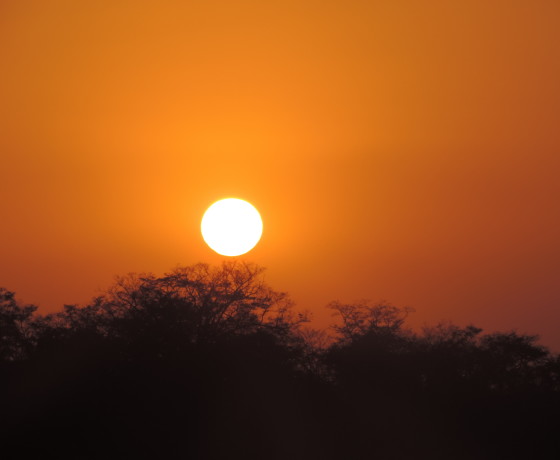