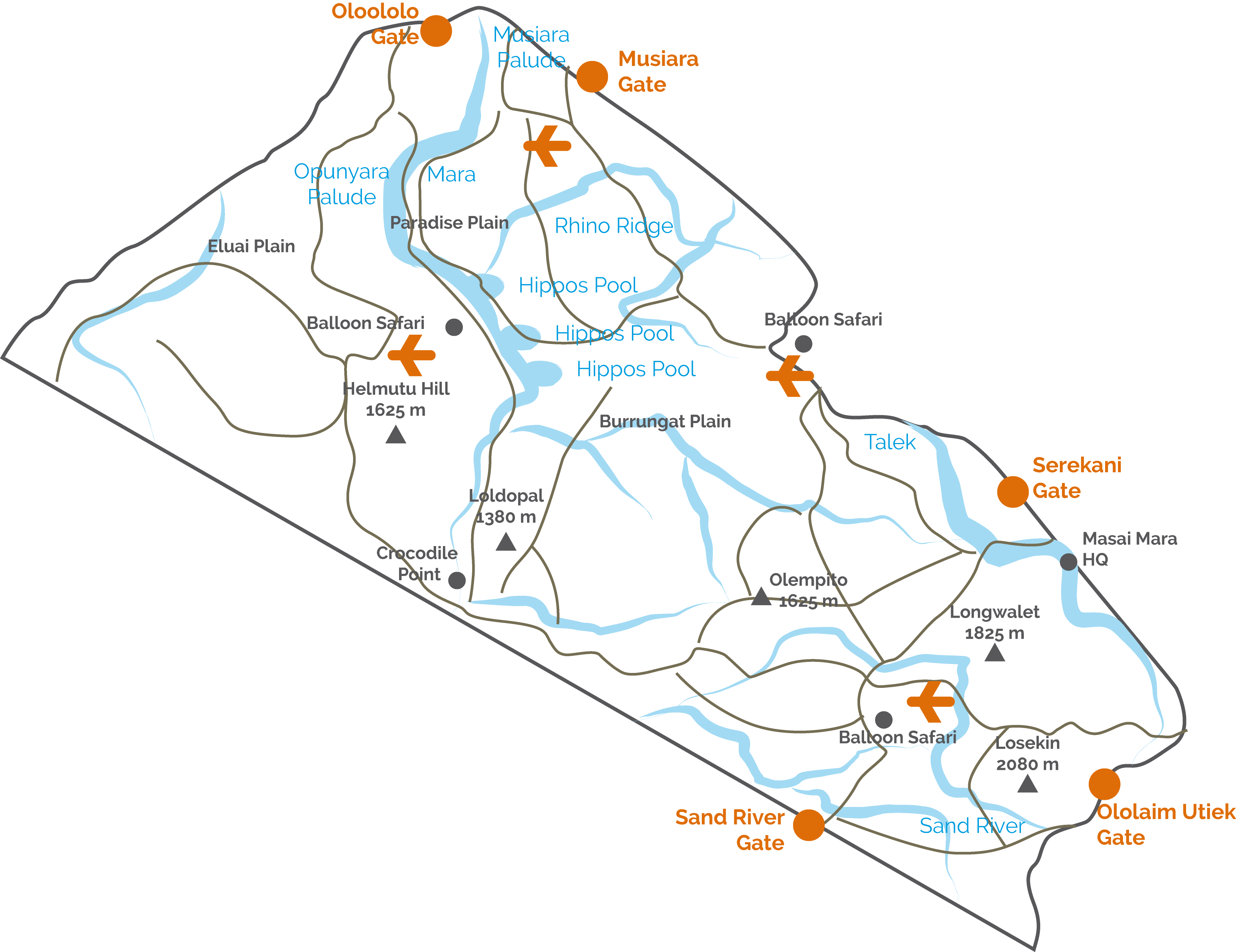 The Masai Mara National Reserve derives its name from the land of the indigenous people of Kenya, The Masai tribe and the river Mara that runs through the park from north to south. The park was established in 1961 and is situated in the Great Rift valley on the southern part of Kenya about 280 km south west of Nairobi, on the Tanzanian border. The park covers approximately 1510 kmq and is situated about 1500 m to 2000 m above sea level. Masai Mara is considered “Must See” for the safari lovers in Kenya. The park is blessed with a wide and unique variety of wildlife and birds. The best place to enjoy the Big Five “ elephant, lion, leopard, buffalo and rhino” among other animals present in the park; such as giraffes, gnus, oribis, hyenas, warthogs, zebras, gazelles, hartebeests, bat-eared foxes, rare topi antelope, rone antelope, hippos, crocodiles to mention but a few. The park has the largest concentration of african lions, including the black maned lion. There are also over 400 species of birds; ostriches, long crested eagle, falcon, secretary bird, marabous etc. The topography of the park is mainly open savanna with clusters of acacia trees, the Mara and Telek rivers bath the rolling dry plains of the park. The Myriad stream is seasonal and appears only during the rainy season. Here between july and october, you can watch the biggest and emotional wildebeest migration when they migrate from Serengeti (Tanzania) to Masai Mara (Kenya) insearch of green pastures and back between december and february. Masai Mara is one of the best places in Africa for its wide range of flora and fauna. If your thirst is to see the wild cats, you are guaranteed to spot them here.

For the adventurous tourists, they absolutely can’t miss this experience. The best way to enjoy the massive nature of Masai Mara is a tour in a Hot Air Balloon, an unique way to enjoy this wide diversity. The tour lasts about 1hour 30 min and it takes place early in the morning, the best time to see the predators still active. If you are lucky, you can witness a live hunt while you glide above. The breakfast is prepared on the Balloon burner upon landing or in camp/lodge.

The famous annual event of over 1 million wildebeest, zebra and different antelopes is the most spectacular moment, considered one among the wonders of the world. A breathtaking spectacular when the massive herds crosses the Mara river from Serengeti in (Tanzania) to Masai Mara in (Kenya) insearch of green pastures between july to october and back between december and february. The trek happens with its fair share of animal drama, as the migration herds attract the attention of hungry predators; hyenas, lions, leopards, cheetahs etc taking advantage of their weak health during this tiresome journey across river Mara. July and august are the best times to see this most world spectacular wildebeest migration and the dramatic sight that occurs during the massive crossing of the swollen River Mara.