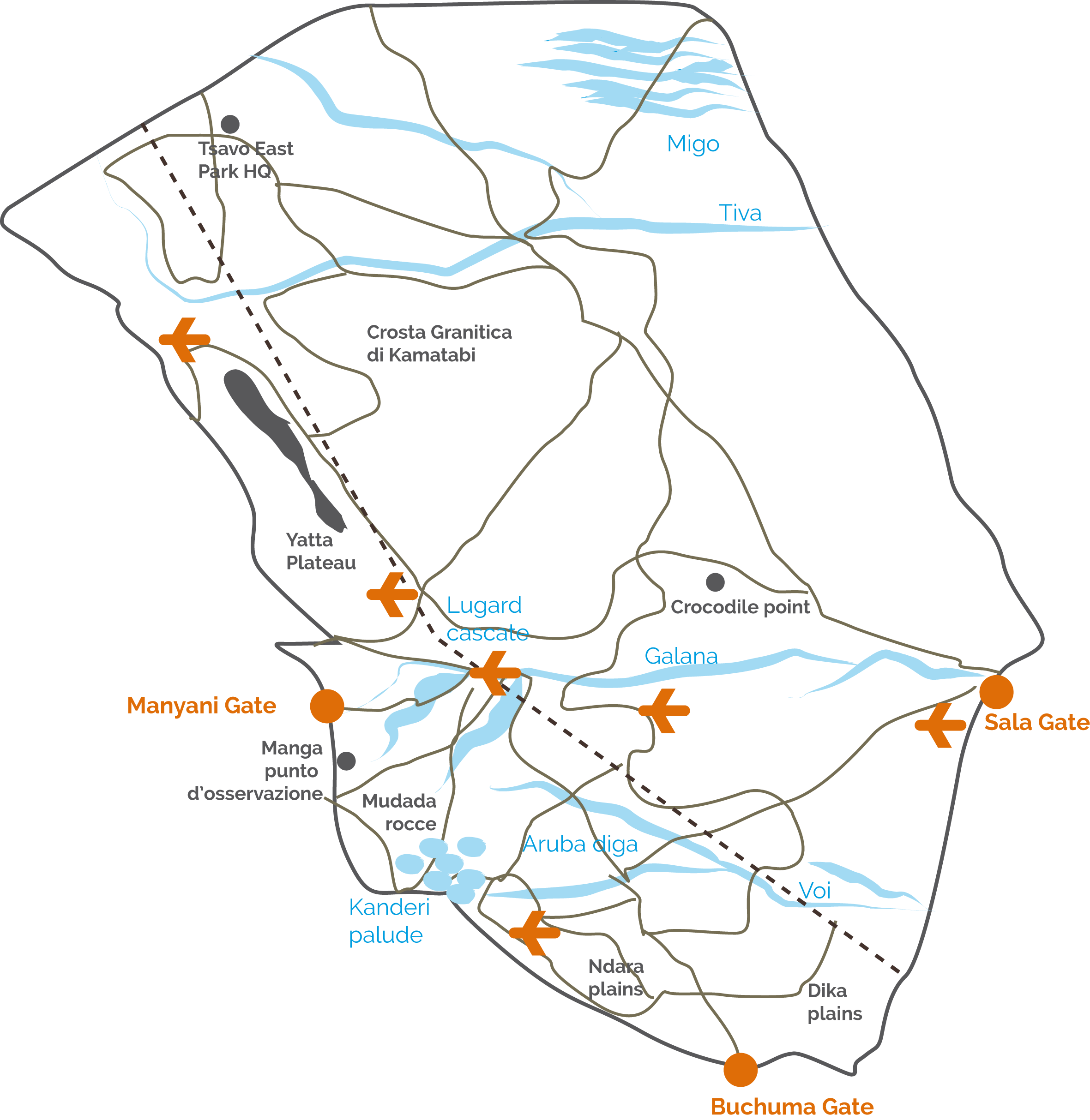 The Tsavo East National Park was established in 1948, it covers about 11747 kmq and is the biggest park in Kenya. The park is about 333 kms South-east of Nairobi and about 173 km North-east of Mombasa. Its relative closeness to the coast beaches makes it accessible even for one day safari even though a night in savanna remains an unforgettable experience. Although not all the park is open to public for research purposes, the park still offers a massive area for enjoying the Kenyan animals and natural scenery. The topography of the park consist of flat area, dry plains with thorny bushes and swamps and marshland near the Galana river, the Yatta Plateau, several natural pools and dams serve as watering holes for both animals and birds. The Tsavo East is rich in fauna and flora, home to many native animals of Kenya, the Big Five (lion, elephant, buffalo, rhino, leopard) hippos, wild dogs, cosen’s gerbil, rats, hartebeest, black faced velvet monkey, hares, mongoose, crested porcupines, waterbucks, antelope, cheetah, giraffe, grevy’s zebra, among others.It is also a good place for bird watching with over 500 species including the migratory birds; african skimmers, red and yellow bishops, goshawks, buffalo weaver, palm nut vultures kestrels, buzzards, starlings, kingfisher, hornbills, ostriches among others. The main purpose of a wildlife safari is to see the animals in their natural state, never get surprise to see birds perched near crocodiles or gazelles grazing near big cats, the truth is that predators generally kill only to eat or when they feel threatened, the rest of the time they live together in harmony. “The natural magic” Here you can enjoy the Lugard’s Falls; a series of rapids on the Galana River where giant crocodiles and hippos live, The Yatta Plateau; the world’s longest lava flow about 290 kms long and about 10 km wide, Aruba Dam; which attracts alot of animals and is used as a water base, The Mudanda Rock; an outcrop of rock about 1.5 kms long and about 20 metres high with a Dam at its base, a popular drinking place for animals. An emotional walking safari along the Galana river accompanied by Rangers and guides. The park was made famous by the pair of maneless male lions who terrorized the area, reputedly killing over 135 workers during the construction of the Kenya-Uganda railway in the 1898. These man-eaters dragged men out of their tents despite the thorn fences (bomas) built to keep them away till they were shot dead by the Lt. Col. John Henry Patterson. This story inspired the famous film “The Ghost and the Darkness”.The park is also famous for its red skinned elephant.